Tehani and Marisol bonded over Pern (and Doctor Who) at a science fiction convention, decided that it was time for a reread of the series, and really, they should blog about that. They are reading in Anne McCaffrey’s preferred way, which is basically publication order.

M: First, I think I should point out this is the only time Tehani and I decided to read out of publication order, because this trilogy has so much to do with the White Dragon and the landscape there-in. It just seemed right. And having read it in this order, I stand by this.

T: To be fair, Wikipedia says Anne recommended reading the Harper Hall books before The White Dragon, so I’m comfortable with our decision!

M: Out of all the books, this set is my absolute favourite (can’t wait to see if that still stands come the end of this).

T: They really are very very good. And the first true time (at least in Dragonsong and Dragonsinger) that we have a female protagonist, which is nice.  And I recently remembered that I did a university assignment to design a unit of work around the first book! It definitely made an impact…

M: Menolly is a fifteen year old girl who is a musical prodigy. She writes catchy songs and is a deeply compassionate, kind person.

So to see the juxtaposition of her being in the abusive, ignorant, and hypocritical family (and hold, which follows the family as they’re the Holders) hurts. I mean, she gets threatened with a beating for asking a question. She gets beaten for having a four second mistake. And her family never has a kind word, or pauses enough in their selfish endeavors to realize their narcissistic reactions to every tiny thing she does.

One good example is when she was banished to take care of Old Uncle by the fire during the new harper’s arrival. It’s clearly outlined that tradition and manners dictate the entire family be there to welcome the harper, and yet, Yanus and Mavi have no qualms ignoring tradition where it suits their selfish whims. Their blind eye to their hypocrisy is maddening.

I have a loving, wonderful family that would never treat me like this, and seeing the void she has in her life because of that gave me a particular ache for for her. Not just on the understanding the need to create, because it’s far more than a want, but this giant hole in her life. She has never had a normal, healthy relationship.

T: It’s so awful. And the worst part of it, for me, was that it was how normalised it all was. It’s a good way through the book before you as the reader truly realise how little Menolly is valued and how very badly she is treated. For me, I think, it wasn’t until she herself figured out her mother had deliberately let Menolly’s hand heal badly to stop her from Harpering that I really got it.

M: Her going Holdless was an almost palpable release in the book, and then, to have her rise to choosing a family of nine(!) fire lizards, and being herself, where she apologized to no one, is just incredible. It’s not like she’d have any technological help to get along while Holdless.

T: That being Holdless (the analogy to being homeless to escape an abusive home life doesn’t escape me) was a better option for her is just awful, particularly given the holders are so conditioned to being indoors during Threadfall. And yet not only does she survive, she damn well thrives, and keeps nine hungry fire lizard babies fed and happy too!

M: Me either. The whole trilogy is a great analogy for being homeless and finding your own personal home.

Also, if I have to hear “No girl can–” one more time in this series, I will scream. Seriously, you’re in a world where it’s all able hands on deck. When did the reproductive bits become so important?!

T: But it’s SO GOOD when she finally gets to Robinton and he’s just, well of COURSE you’re a Harper, what else would you be?

M: Agreed. The unabashed, no holds welcome she receives from Robinton and those who’re at the the forefront of Harper Hall is the part where I always find myself cheering. Aloud, while my cats judge me for shouting.

Getting to watch her grow from this person who is terrified of everything into standing up for herself, to the point where she cries insult on Pona (and oh, how satisfying that is, what a horrible person), to being confident in herself when we transition to Piemur’s story. It is one of the best character growth arcs I’ve ever read, and completely in step with the rest of the world. 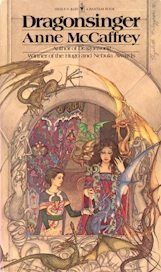 T: Oh yes. And I love that when you look at the arc, you see that it’s always there, waiting to come out. Who she becomes is partly because of what she goes through, but she’s strong and smart and capable in herself.

McCaffrey is so damn good at characters. I sobbed – again – at Jaxom’s Impression of Ruth, even though I just read it in Dragonquest. And then oh my gosh, when the Masterharper and Oharan trick her into singing at Benden when she’s found, it’s just brought on floods of tears – it’s so lovely!

M: There’s a small but significant character I want to mention: Camo. Camo was my first introduction to a special needs person in print that wasn’t talked about as malformed, like every other one I’d found at an early age. Camo is treated as a nice person, which he is, and while he doesn’t get much stage time, I really enjoy that he’s part of the team without any fuss.

His story makes me cry in the Masterharper book.

T: McCaffrey was again ahead of her time with Camo.

M: Oh, and Petiron! Man my opinion of him changed greatly after reading that book. It’s interesting going back and reading these books now that I know his entire story. Although it hints at it in these books, Petiron in his own way tries to make up to his son, Robinton, but teaching Menolly and encouraging her gift and to get her to the Crafthall. Bumbling, to be sure, but given how he was before going to Half-Circle, it’s a big concession.

T: It’s been a long time since I read that one so I’m looking forward to rediscovering it!

M: Which leads us to Piemur. Now, I really like Piemur, both as a person and his story, but I still wonder sometimes why we had his story instead of a third Menolly book. The first two were so focused and dense, to move to him feels weird. Like it was tacked on to the trilogy rather than a smooth transition. His story is more like a tie-in back to the rest of the Pern series, so perhaps that was intentional.

T: I agree. In fact, now that I’m almost done with The White Dragon, I think really, the Harper Hall trilogy is in fact a duology (the Menolly books) and Dragondrums (Piemur’s story) is a prequel to The White Dragon.

M: You’re right – that makes far more sense than calling it a trilogy.

Having said all that, I do enjoy seeing Piemur realize he has more skills than he realized, and learning to self-rely on himself. Getting to see another dimension of harpers and far more than singing and creating, they’re influencing, and this sort of secret intelligence work they do is REALLY interesting! I don’t know exactly what you’d call them. They’re not spies, nor thieves, but their effect is far-reaching.

T: I think Piemur’s story really shows us the role the harpers play on Pern, and he’s such a great character – he’s so quick witted but intelligently so! It’s also interesting to see how he changes throughout Dragondrums, just as Menolly does in her books. I particularly liked how he was so leery of groups of people after being on his own with just the critters for so long. And it’s where we meet Sharra – I forgot how important she becomes (until I read The White Dragon, which is not what we’re talking about so we probably should move on…).

M: I am in danger of gushing, so I’m going to stop now. Seriously, read this trilogy! It’s great!

Previously, in the Great Pern Reread of 2015:

View all posts by Tehani

One thought on “Revisiting Pern, the great McCaffrey reread: The Harper Hall trilogy”