Congratulations to Kaaron Warren whose story “All Roll Over” from In Your Face has been shortlisted for the Australian Shadows Awards! Well done to all the finalists.

Super excited to discover yesterday that we have FOUR shortlistings for In Your Face in the 2016 Aurealis Awards! Huge congratulations to Thoraiya Dyer, Claire McKenna and Shauna O’Meara on their short story shortlistings in the Fantasy, Science Fiction and Young Adult categories, respectively, and to ALL the contributors, as the book itself is also shortlisted for Best Anthology!

We are in excellent company on the shortlists – well done to all the creators recognised this year, it’s a wonderful list. 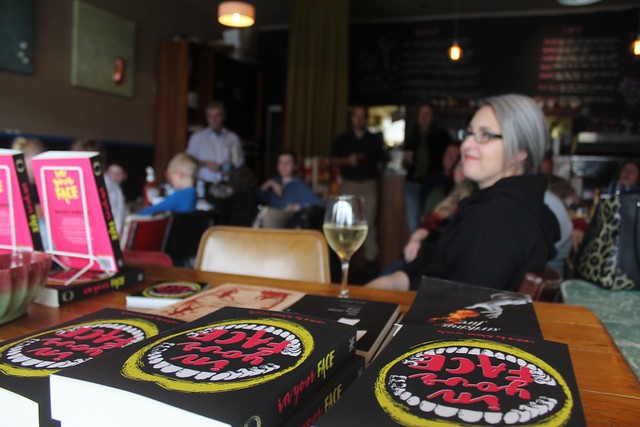 At 3pm on Saturday 17 September, a wild bunch of Canberra speculative fiction lovers (and some ring-ins from interstate) packed out A Bite To Eat in Chifley for the official launch of the confronting, challenging anthology In Your Face. The publisher and several authors took centre stage to talk a bit about the book and their individual stories, and bitey cakes and drinks were enjoyed by all. 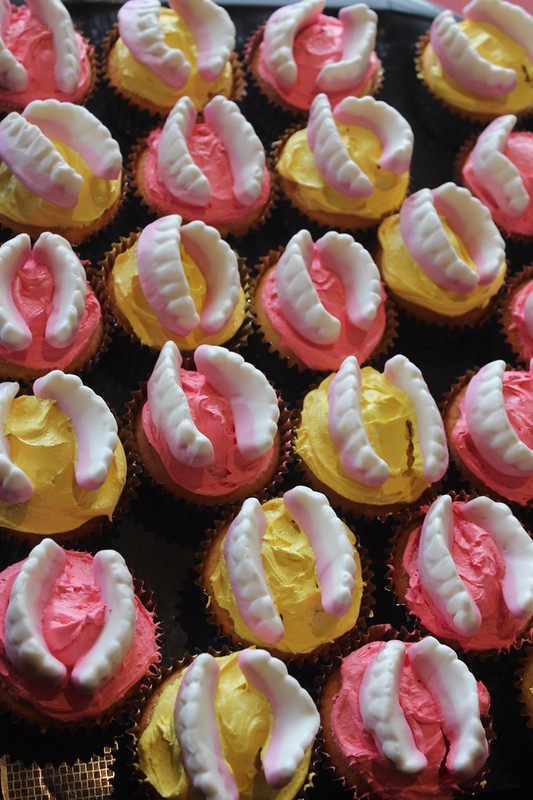 A huge thanks to everyone who participated in the launch – it was loads of fun (if a bit noisy in the venue) and a wonderful way to recognise the hard work of everyone involved. Especial gratitude to Cat Sparks for photographing the event, and as always, to the authors who have permitted me to publish their amazing work, to SpecFaction NSW for the initial seed funding, and to all the Pozible supporters who helped bring the book to life, as well as Amanda Rainey for the dramatic cover, and Elizabeth, Matthew and Katharine for proofing. You’re all awesome and the book could not be what it is without you.

We’re (finally) launching In Your Face and you’re all invited! Join with editor Tehani and many of the fabulous authors to celebrate (a little belatedly) the launch of the challenging and confronting In Your Face anthology.

Please RSVP to Tehani at fablecroft@gmail.com for catering purposes!

Look forward to seeing you there.

A chance to win a copy of In Your Face is underway at Goodreads!

See the giveaway details
at Goodreads.

Check out the cover for In Your Face, designed by the ever-amazing Amanda Rainey!

It’s a little different to the version we first shared with our Pozible backers a while ago, but we think this suits the book perfectly.

We’re in the final throes of editing for the book, and on the downward track to publication – can’t wait to share this anthology with our readers!

The good news is that our wonderful designer Amanda Rainey has given us a peek at her draft for the cover of the forthcoming In Your Face anthology, and it is just as confronting and striking as we could have wished. Check it out!
​

​And now the bad news. Due to many reasons, some beyond our control, we’ve had to delay the release of In Your Face. We’re now aiming for an official launch at Continuum in Melbourne on the June long weekend. We want the book to be the best it can be, and know that the June release date will help make it be so. We thank our Pozible campaign backers again for their amazing support, and look forward to bringing the book to you all.

There are just over 60 hours left in our In Your Face crowdfunding and pre-order campaign. Thank you so much to every person who has shared or backed the campaign, and to our incredible authors who have talked about the often very personal genesis of each of their stories (read about them via the links here).

We’re still chasing our stretch goal of pro-rates for all the original stories in the collection, so this last 60 hours could be huge!

The book comprises original and reprinted speculative fiction stories that deal with very provocative themes. These stories are confronting but with a firm purpose – they are pieces that will perhaps make readers uncomfortable because they are a bit too hard-hitting or close to the bone, but which interrogate these themes and ideas, and make a point about the world we live in.

If you’d like to support the book and pre-order your copy (in print or ebook – still fantastic pre-order prices available), you can back the campaign here, for as little as $8.00 for an ebook.

We are so very delighted to have now tripled our target, with the tally passing $1500 earlier today – to all our wonderful backers, THANK YOU! To every single person who has shared the campaign with their networks, friends, families and random people on the street, THANK YOU! To our amazing authors, who continue to astonish with their thoughtful posts about their stories, THANK YOU!

The tally so far means that we have been able to add several more stories to the anthology, taking us to 21 pieces (including four reprints), and a total of over 135,000 words (check out the amazing Table of Contents). We’ve also been able to increase the payment for authors of stories longer than 5,000 words (to pay them for the full length of the story), and the payment for reprint pieces. That’s fantastic!

But we’ve still got a dream! In order to pay pro rates of six cents per word for the original stories in the anthology, we estimate we need to reach a goal of $4,500 – and we’ve still got ten days to try for it! We’re happy to aim for the stars even if we don’t quite make it though, because even if we only get to $2,500, we can increase the per word payment, which would be fabulous.

So please, tell your friends! Share with your networks and check out the blog posts about the stories – this book is going to knock your socks off!

If you would like to support the the In Your Face Pozible campaign, you can do so here – thank you!

Cat Sparks is a multi-award-winning author, editor and artist whose former employment has included: media monitor, political and archaeological photographer, graphic designer and manager of Agog! Press amongst other (much less interesting) things. She’s currently fiction editor of Cosmos Magazine while simultaneously grappling with a PhD on YA climate change fiction.  Her debut novel, Lotus Blue, is forthcoming from Talos Press in February 2017.

A friend of mine, an English teacher once remarked upon a curiosity amongst her class of 17-year-old boys. When asked for the worst thing they could think of in regards to their own futures, all apparently cited the same thing. That the absolutely worst thing ever would be to get blind drunk and wake up in bed next to a fat girl.

My friend was gobsmacked. Surely the boys were more worried about employment, or climate change, terrorism, HECS debt, rising house prices or maybe speeding and getting mangled in a car wreck? Nope. Unanimously fat chicks were the epitome of social and personal apocalypse.

Which got me thinking…

I reckon every Aussie woman larger than a size 14 has likely experienced a man criticising her appearance. I’m not talking about garment choices, I’m talking about overweight, and the invisible accompanying license to express contempt.

My In Your Face story, “No Fat Chicks”, is set in the near future where a mystery virus has rendered all women obese. The story focuses on a group of male friends not coping well at all with the situation.

I’d had the idea for this one for some time, but hadn’t known where or how to start. I recognised the story would be tricky – but all my stories are difficult these days. Perhaps I should have realised a sci-fi semi-satire piece might prove particularly troublesome to place.

An Australian literary publication invited me to sub a story. They sat on “No Fat Chicks” for months before finally giving it the flick. My rejection came with a half page email mansplaining the intricate mechanics of human attraction. As far as that particular editor was concerned, I simply didn’t know how such things worked.

I sent the story out again a dozen times. A few submissions scored a polite ‘no thanks’ but other rejections read more along the lines of “ew – get this thing out of my face!” Even a sci-fi feminist magazine wouldn’t touch it. They weren’t sure why they didn’t want it, but they didn’t. A prominent editor friend had a look and advised me that the story was too misogynist.

It wasn’t the fact of the rejections that bothered me so much as the wording of them. As a writer of 25+ years in the saddle, I’m no stranger to editorial rejection, no kind of delicate little flower who expects her words to be regarded as precious gifts. I’m an editor myself – and a bit of a hardarse – well aware that no can mean no for many reasons.

“No Fat Chicks” is not about #allmen, but the men it describes are absolutely real. For research, I waded through a swamp of unpleasant websites. The kind that advocate dating girls with eating disorders as they’re hot in the sack and easy to control. And then there was the miserable hatefest known as @fatshamingweek. Don’t go there – I really wish I hadn’t.

To be fair on the editors who rejected my submissions, I tweaked the story every time it bounced. Perhaps my earlier drafts didn’t do my ideas proper justice. Perhaps my writing needed a bit more polish. But the overwhelming feeling I experienced with each no was that I wasn’t supposed to be telling this tale at all.

Western women are raised with the belief that it’s more important to be beautiful than anything. We can all name five supermodels or screen sirens, but how do we score naming five top female CEOs or scientists?

There are many men out there who consider ‘fat chicks’ a blight upon the landscape. They believe the world was made for them alone. That women and girls are servants and accessories, and all are supposed to be petite and small. Anything else is unnecessary and offensive. This story is about those men. It is not about all men everywhere, any more than any other story could be expected to reflect all men everywhere.

Thank you Tehani for giving “No Fat Chicks” a go.

Editor’s Note: Cat’s story is the true spark that brought the In Your Face anthology into being. I wasn’t going to do an anthology this year. “No Fat Chicks” is the reason the book came to life.

If Cat has sparked your interest in the In Your Face anthology and the powerful stories it contains, you might like to support the crowdfunding campaign by pre-ordering the book (and lots of other goodies) at Pozible. And please feel free to share with your networks!

You can find more posts by our authors linked here.

FableCroft
Create a free website or blog at WordPress.com.